After breakfast it was time to start riding again. My Tomtom Rider 410 showed us the way to the nearest gas station in Weil am Rhein… but what I didn’t remember in that point that in highway in Switzerland you’ll need the Vignette! And the nearest Shell was AFTER the border checkpoint in autobahn/ highway with only possible direction to Switzerland… Oops! (We decided that we are not going to buy the expensive Vignette -we would rather ride the small roads in Switzerland area).
After a short discussion with customs officer we were able to make nice move to the other side of the customs area and ride back to Germany… and soon after that ride through the city of Basel. That took about 1 hour! In the southside of Basel we actually got our first real mountain hairpin corners when we climbed to Passwang Pass (elevation 1204 meters). And we had the first break in the “summit cafeteria” (http://www.alpenblick-passwang.ch/). 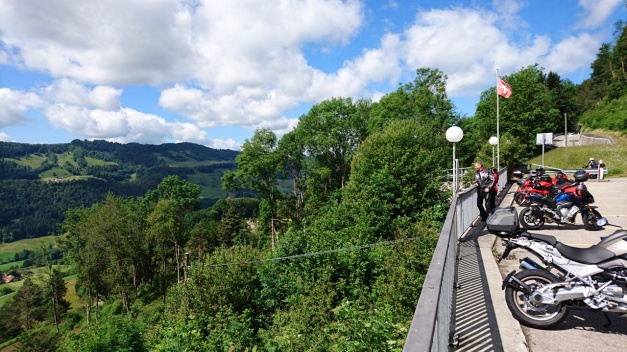 The view to valley was amazing.
Then we had Grenchenberg! What an amazing ride it was! The road is so narrow (climb from the north) that it is simply impossible to overtake a car. And I was so kind that I stopped and wait for the other 2 riders… and we had to drive behind a car for a long time.

Just before the summit there was a place with lots of cars, tents and people… I don’t know if there was a some kind of special meeting or a camp(?) but it looked very strange! (In video 09:00). We had a nice break in the summit restaurant.
The southside road of Grenchenberg is not that narrow, there are even some busses driving… Then we entered Bern.
I was actually quite scared about riding through Bern! But it was Sunday early afternoon and there was not that much traffic. We did see the city center terminal of Bern and it was quite easy to ride through. From Bern we choose the road beside (and under) the highway to west as we headed to Lake Geneva. In the way we got some pretty nice views to the Lake of Gruyère (a reservoir).
Also the view to the Lake Geneva was amazing! I had planned the route to the beach Boulevard of Vevey, Clarens and Montreux… And that was a big mistake! There was annual Jazz Festival of Montreux going on… it took about 2 hours to ride that boulevard! (But we learned to do some nice splitting!) We did see the tents! And we heard some music! So I guess we can say that we were at the festival!

Finally after a long day we arrived in Thonon-Les-baines. It’s a city in French side of the Lake Geneva.