Posted by gozamite on 23.7.2017
Posted in: motorcycling. Leave a comment

Our accomodation was in the heart of Livorno, bikes in the big parking-garage. We needed to wake up very early to reach the ferry from Livorno to Bastia (in Corsica). 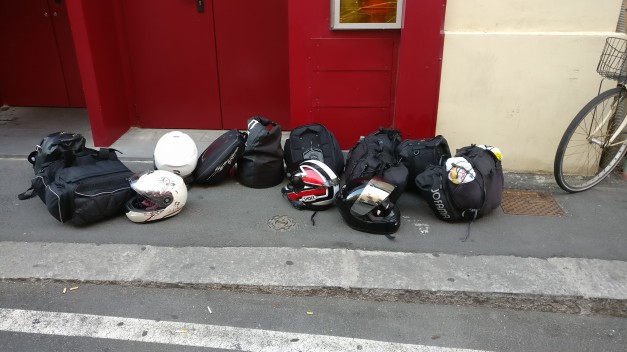 They just left the Bags and gear in the street?? Ok, I was watching them while they picked up the bikes from the garage. 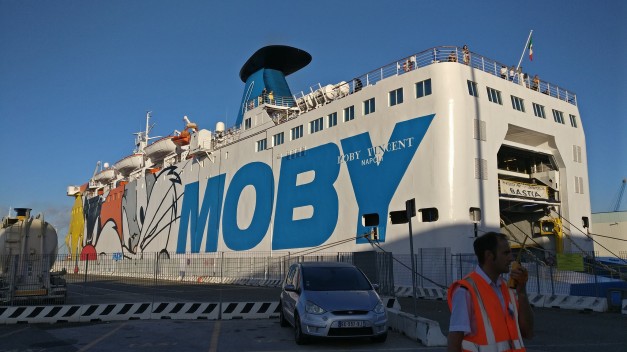 This is Moby Lines “Moby Vincent” from Livorno to Bastia.

And here’s some professional protection to keep the bike up in the waves of Mediterranean! I think you need a very good insurance to cover some possible damage if this doesn’t hold… Then it was about the sea for the next 4,5 hours! Here I see the island for the first time… Looks like there’s lots of mountains! In Bastia the first thing that happened was that the Ducati Monster was out of gasoline!! It was only about +30 and I went to pick up some… First gas-station was closed second station didn’t exist, luckily the third station (about 3km’s away) was ok and I got some gas! Then we pushed the Ducati to start it (once again) and rode to this same station to fill all the other tanks too. And pushed the Ducati to start it again!

But after these minor delays we were finally riding in Corsica island… And what a beautiful island it is!!

After Frecciasca, Santa Maria and Tettola villages we arrived to the nice city of Saint Florent and from there we started to climb to the desert Les Agriates. This part of the the D81 -road is full of tight corners!!! Such an amazing road!

After very tight corners we had to ride through the cities on the north shores of the island. Luckily the traffic was not bad and in some parts the route was nicely giving some views to the sea! Then for the last we had the part of D81-road from Calvi airoprt to our hotel. This road was in excellent condition! In the Hotel there was swimming pool waiting!!!