Now we’re getting in the business! We’re in the middle of the mountains and at least half of the days route is mountain passes! Videocamera was on many times. First time was already from the yard of our guesthouse… this was very narrow and twisty road down to Tristach village like this:

After few kilometers there was also police checking the speed before we were in Italy and one of us got the ticket (35€ for speeding 94@80)! Then after the country changed to Italy we had nothing but mountains ahaed!
Lake Misurina, Passo Tri Croci, Passo Giau… Here’s compilation of these rides:

Ducati Monster rearbrakes are getting quite hot… in 02:30 -Check it!
Finally in the top of Passo Giau we had some time to enjoy the views: 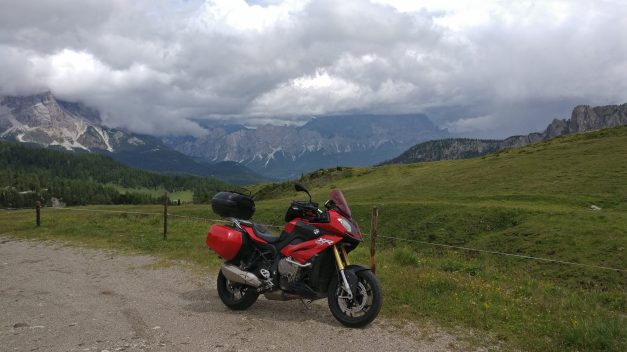 We still had some very nice rides to do! Passo Staulanza (it was raining while we’re riding this) and Passo Duran.

Up in Duran there was a bar with a fireplace inside… We could make ourselves cozy and warm! 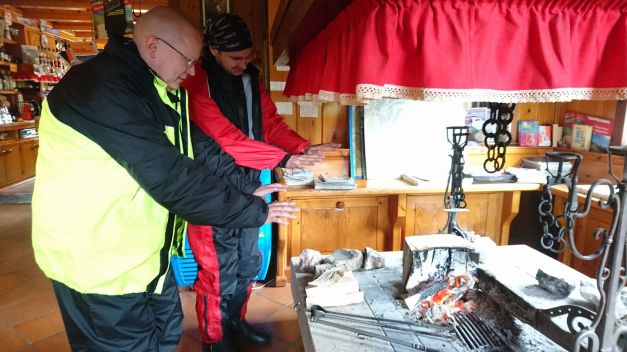 The previous video ends in a roadwork that we couldn’t ride through. But after waiting few minutes the workingmen said that there is detour so we can continue without waiting… And we found this detour (or a shortcut)!

Then we had only the very beautiful route of Lago di Mis and then mountains were gone… and our day had just begun!
Couple hours later in the village of Castagnole the Ducati Monster didn’t start anymore!! The starter engine was broken! Also my BMW had problems with the temperature, it went easily over 105-107 degrees and that is not ok!!
We try to figure out what to do with Ducati and there was some local who called to some guy who had a mc-service. And finally Ducati was pushed to start it and it went alone to this service.
My BMW’s overheating was worse all the time since it was about 5 in the afternoon and the traffic in Italy is very slow! If you really don’t have to ride the small roads in the north side of Venice… it’s better to choose autostrada!!
Soon I said that lets go straight to autostrada so we will not waist more time… I also said that everyone can ride their own speed and tempo but I saw other bikes many times in the way to Ravenna (except the Monster wich was in the service). 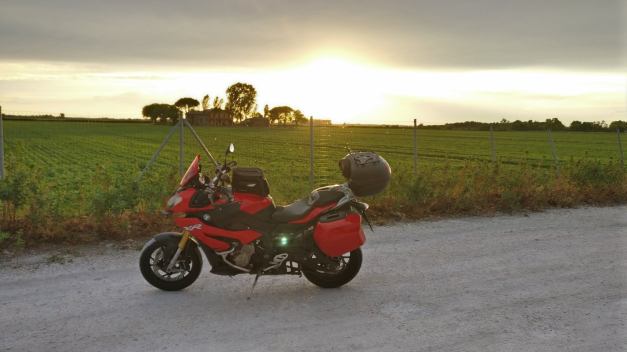 Finally about 9pm I was in the hotel in Ravenna (about 12 hours of riding!) and in 5 minutes all the other bikes were there too! Also the Monster arrived because it had chosen the fastest possible route to Ravenna. After this evening we had to push to start the Monster everytime! (They couldn’t fix the starter in the service)
The route for the day was supposed to be like this… But depending on a bike it was probably different.